On June 23, a marathon run will be organised by the Guwahati Sports Association and the Assam Olympic Association. Notably, Hima Das will represent India in the 4×100m relay at the Commonwealth Games.

Earlier, Chief Minister Himanta Biswa Sarma gave Rs 5 lakh to athlete Amlan Borgohain to help him for better preparation for the upcoming 2022 Asian Games slated to be held in Hangzhou.

However, at the 61st National Senior Inter-State Athletics Championships, which ended on June 14 in Chennai, Hima won a silver medal in the women’s 200-meter race.

Meanwhile, Amlan who recently created a new national record in men’s 200 m held at Calicut in Kerala, already cleared the qualifying time for the 2022 Asian Games to be held in September. 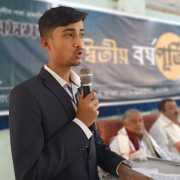